To Renew or Auto-Renew… our Librarians give a paper at the Koha User Group, November 2018

In 2016/2017, the Library undertook a major review of our Library Management System with the result that we moved all our data and systems over to an open source LMS called Koha. The review gave us the opportunity to look at our existing practices and procedures and, following extensive discussion, consultation and research, we introduced auto-renewals in September 2018.  In November 2018, two of the Librarians responsible for managing Koha, Simon Lyes and Haydn Clark, gave a short presentation of our experiences at the Koha User Group.

The talk looked at 3 main areas:  Why auto-renewals, Obstacles, and What we learnt.

Simon and Haydn explained the reasons why we decided to introduce auto-renewals.  In their talk they identified the key reasons as simplification, fairness, efficiency, peer pressure and popularity.  As with many academic libraries, we had a complex system of loans and renewals aiming to satisfy different student needs.  One title may have some copies for long loan, others on week loan, reference only or short loan (3 hours).  Each loan had different levels of fines attached, and different renewal rules.  Students would have to remember to renew their books or risk a fine, even when the books weren’t required by other library users. Auto-renewals meant that we were able to simplify all our loans (other than the Teacher Training Collection) to just 2 weeks each, with just one fine system. Students who borrowed books that weren’t required by other students would be able to keep them for up to 6 months. We expected a reduction in staff time used in labeling books, explaining different loan types, and reminding students to renew. And we hoped for a reduction in fines as only students who didn’t return books in demand would be penalised.

There were some obstacles that we resolved through compromise and a great deal of promotion.  Some colleagues felt auto-renewals would be difficult to explain to some students, particularly those with English as a second language.  We were also  concerned that it might be easier to forget about loans without the regular need to renew. Auto-renewals do depend on borrowers checking their college email, so we heavily promoted student email information in our inductions, at the library counter and to teaching staff.  We also hoped that with the introduction of Office 365 for students and staff, use of college email would become standard.  There was a concern that books may be kept out longer, leaving fewer copies on the shelves to browse.  Again, the solution was to educate students on using the library catalogue for discovery and reservations.  In terms of staff workload, there was the major job of removing loan stickers from thousands of books that had the week loan status.  Simon and Haydn also also talked about the technical problems in switching item types for over 70,000 items from 3- and 1-week to the 2-week loan type, and how PTFS had helped by running the switch for us.  We had to return and reissue everything that was on loan so that these would auto-renew going forward.  We also made sure that we consulted with students and staff, through the policy approval process, in student course committees, and by liaising with the student union. 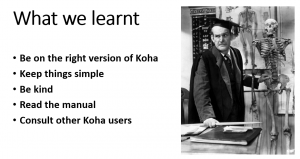 We learnt a number of lessons that we were happy to pass on.  Firstly, anyone thinking of introducing this service must be sure that they are on the right version of Koha.  This is because there was a bug on the version of Koha that we were on, that caused significant problems with calculation of fines for items where auto-renewal was not possible. This bug was eliminated in the subsequent version of Koha.  Our second piece of advice was to Read the manual.  We had problems with the set-up of how the email notices worked, and what information could be sent for each email.  There was some confusion with the first emails as they didn’t contain the expected information.  Finally, Consult other Koha users.  Simon and Haydn used this as an opportunity to thank other teams in the room that had given us input from their experience of auto renewals.

Our conclusion was that overall the service has so far been successful.  Fewer fines were being collected from students, and feedback has been positive. We like the simpler loan system, and we are seeing students take control of their library records and check their emails.  We have reached our 6-month mark and have not seen any problems in recovering books. As for the talk, Simon and Haydn enjoyed their day.  The talk was received well, with a surprising number of questions asked, given that they were the last presentation of the day and people had trains to catch!